Hey! I’ve been away for quite some time and I probably won’t be coming back on a regular basis any time soon. I’m just here for shameless self promotion.

Even though I am coming up on 50, I am still actively making a fool of myself performing in my family band The CheeseBergens. In fact, we have just released a new album and if you could take a listen, it would mean the world to me.

You can download the album for free at our Bandcamp link.

We also have a lyric video below. 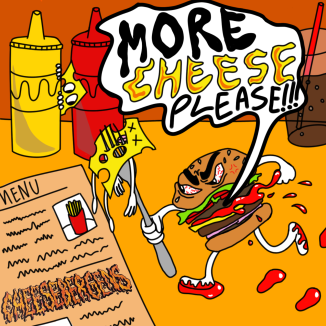 Hello followers and friends! If you are reading this, you probably already know that I have passed on, which is precisely why I haven’t been around the blogosphere much to read your blogs lately. As I look into this batch of molten chocolate that will seal my fate, I contemplate the meaningless of life and all that comes with it.

This video is one of the few things I will leave behind to mark my legacy. If you like or comment, my soul may become light, giving me one last chance to ascend to heaven. Otherwise I am doomed to rot in hell for all eternity, but who am I to make your feel guilty?

Friends! It is a monumental day in CheeseBergens history! Please join us by watching this video premier! Take a moment to indulge in this guilty pleasure and watch myself and my family as we make fools of ourselves! Ladies and gentlemen, I bring you…”Cool”!

Hey people! My band, The CheeseBergens has entered a contest for Band of the Month on Metal Devastation Radio and we need votes! To avoid gratuitous self promotion, I’ve decided to also write a poem to help promote the cause. A lot of my blogging friends already voted, I know, and thanks so much to those who did. Here is the link:

And here is the poem:

If you vote I’ll kiss a frog
If you vote, I’ll like your blog
Leave messages and you can boast
Marissa commented “Great post!”

And voting isn’t just for you
Your aunt can vote, your mother too
And if they think the format’s foreign
Just log on and you vote for ’em

P.S. By the way, voting is ongoing until the end of April 2017. If you are reading this blog before the end of April, you still have the opportunity to vote, so please do. It’s very much appreciated! 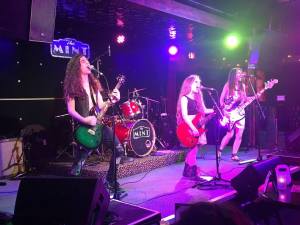 On an endless quest for blatant self promotion, I decided to add this link. It’s an interview on Metal Meat with The CheeseBergens. I think it’s really quite funny, especially the part where he rags on us for being old, ha, ha! Anyway, those of you who have the energy to follow the link, can (hopefully) enjoy a fun read.

Just do it- but do it with cheese!

Now you might say your lactose intolerant
But I say just suck it up or you can go get bent
Cause if your tummy hurts then I say “oh please!”
Go wash it down with Tums or some anti freeze
Theres just one way to serve it that’s gonna please

Just do it – but do it with cheese!

Just do it – but do it with cheese!

Hello friends! I’m sure you were all waiting with bated breath for this last installment of our Three Songs In Three Days Campaign. Fun factoid!! Due to some technical issues this song almost was not released today!!! Lucky for you, we had a last minute edit that saved the day. I know, imagine you, all bummed out for the weekend because you were waiting for this song and couldn’t be sure if you would ever hear it!!

Well, here it is. This one was published before as a poem but now has music added, so PLEASE LISTEN!! Come on people, I can tell how many of you are listening and it’s a lot more than those who are stopping by to like or comment…although the fact that you are enjoying the lyrics is appreciated as well….but we work hard on this stuff!! This is another track with my daughter on vocals and you know she’s a newbie at this so all feedback is appreciated, especially the good kind!! Okay, without further ado, The CheeseBergens’ lifelong motto…Do It With Cheese!

It started when my mom had a middle aged crisis
Should have seen a shrink, left to her own devices
She was gonna rock n’ roll just like me
Now she’s embarrassing herself for all to see

I know you think my sister’s cute but oh guess what
Take my word for it, she’s a freakin’ nut
My dad is kind of cool but sometimes he’s a bummer
I guess that’s okay because he’s just the drummer

Hello and Happy New Year to you all! As a way to kick off the new year, our family band is launching a Three Songs In Three Days Campaign so prepare to be bombarded. Here is the first of three, and I believe I have not yet shared these lyrics with you so…added bonus! The song tells the story of how the wackiness all started…well, more or less…

Tried hiding in the bathroom
I thought that would be safer
‘Til someone said “hey miss
We’re out of toilet paper!”
If one more person bugs me
I swear I’ll flip my lid
This woman came up to me
And that’s just what she did

This is another poem that I published many moons ago but added some lyrics to make it in to a song. It also happens to be the first recorded CheeseBergens song that my 9 year old daughter sings. Let me know what you think.

Also, the music is free to listen to, but if anyone is so inclined to make a donation, all funds will be given to the Ovation Music Fund, a nonprofit dedicated to helping underserved kids pay for music school tuitions.

The blood begins to pour
And so awash with sins
For midnight strikes the hour,
The ritual begins

And so the door flies open,
And so the music ceases
For the dramatic entrance
Of she on high, the priestess

But he just rolls his eyes
Says “Don’t know why you make
Such a big freakin’ deal
Let’s just cut the stupid cake!” 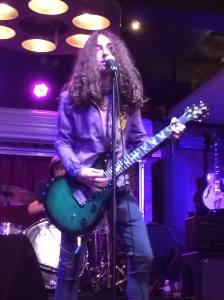 And sorry for the shameless self promotion, but I see no better media attachment than that of our family band’s video for Mommy and Daddy Worship Satan. For those who didn’t see it yet, enjoy!

This is another poem I converted into a song for my family band The CheeseBergens. You can see the lyric video my husband made here. It’s pretty funny!

Our ode to Lemmy Kilmister, in loving memory:

What would Lemmy do? 3x
Whatever he’d do, he’d do it better than you

What would Lemmy do? 3x
Whatever it is, he’ll do it better than you

What would Lemmy do? 3x
Whatever it is he’d do it better than you.