Nine times I asked “the garbage out?”
You claimed you didn’t hear
Eight peanut butter Oreos
That somehow disappeared

For my husband on our Anniversary!

Inspired with the help of Dina over at Wine and Cheese Doodles and her post 15 to Life.

Blogging is challenging because, not only do you have to write well, but you have to engage your audience.

I wrote this poem for my husband not too long ago. I, of course, thought it was HILARIOUS.  And then I asked myself, I said, “Myself, does anyone really care that my husband is worth his weight in saturated fats?” Probably not. But today is our 13th wedding anniversary. So this one’s for him. And if you like it, that’s cool too.

Oh, and don’t try to tell me I’m not romantic.

Don’t need no GPS for fast food chains,
He knows just where to go,
If he don’t know the locations,
He sniffs them out with his nose.

It’s like the golden gates of heaven part,
When we step inside,
Cause he’s the White Trash Palette,
And he does it deep fried.

He’s eaten more burgers,
Then the Earl of Sandwich,
Burger King is his servant,
Ronald McDonald is his bitch.

He’s hanging with Carls Jr.,
And he’s getting macho,
With Jack in The Box,
And upper management at Del Taco.

Don’t need to ask how to take my meals,
I know that he’s the boss,
He’s the connoisseur of french fries,
And he gots the special sauce.

And when it comes to lovin’,
We take that magic ride,
Cause he’s the White Trash Palette
And he does it deep fried. 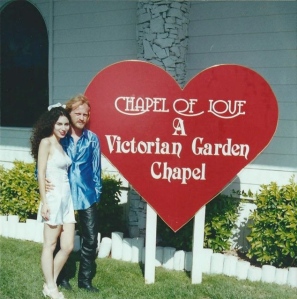