Friends! It is a monumental day in CheeseBergens history! Please join us by watching this video premier! Take a moment to indulge in this guilty pleasure and watch myself and my family as we make fools of ourselves! Ladies and gentlemen, I bring you…”Cool”!

My daughter’s birthday hand in hand,
With memories of Legoland,
A broken shoe, a bag forgotten,
Could not make my memories rotten.
A hotel room where it would be sheer luck,
To escape lice and bed bugs,
And my patience wearing thin,
With all the lines that we stood in.
But all this would barely matter,
My daughter’s happiness I would rather,
Nor did it dampen the spirits of our foursome,
Lest we think it any less than awesome.
But my soul with Satan I’ll secretly haggle,
To see this place drowned in Kragle.

Never could my imagination be so wild,

As to think heaven could bless me,

With a child quite so lovely as thee.

What wonderful thing did I do or say,

To have you as a gift for Mother’s Day,

And as I look at her and all her charms,

I long to hold her in my arms.

Her face so sweet, so little and cute,

But all she says is “I have to toot,”

And then produces an odor so foul, 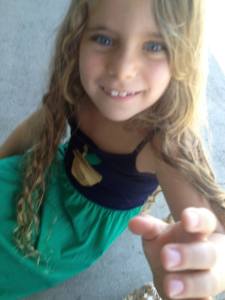 Happy 7th To My Sweet Anjeli-cat!

When my children were born,
I tried to be caring,
And I swore I would.
Swear off swearing.

But my anecdotes,
Just wouldn’t work,
When I could call my boss,
No more than a jerk.

And the F word,
Couldn’t be duplicated,
In all it’s glory by using,
‘Fornicated’.

The stuff on the floor,
Became just that – stuff,
And the expression shoot,
Not quite strong enough.

It was difficult to give people,
Insulting one liners,
Capped off by calling them penises,
And vaginas.

So I’ll go with ‘fuck off’,
Rather than ‘beat it’,
And hope that my children,
Never repeat it.

I don’t think I can take it,
I really had enough,
You keep calling the house,
But when I answer you hang up.

My husband says you’re just a stupid kid,
And that you will stop soon,
But you never hang up on him,
Though sometimes he takes it in the other room.

I wonder if you’d just hold on,
For a great need has arisen,
And I have so much to say,
If you would only listen.

I’d tell you about my children,
They are healthy, they are happy,
And I would tell you how very much,
Those kids love their daddy.

I’d tell you how joyful we once were,
Such a perfect match,
And how everything will be better,
When we get over this rough patch.

I’d tell you how it feels,
To sit around and wait,
For him to come home,
When he says he’s working late.

I have faith in something bigger,
And I can still believe,
He wasn’t lying when he told me,
He would never leave.

I can tell you about the dreams we had,
And all the things we did,
But oh why would I tell you all that?
You’re just a stupid kid. 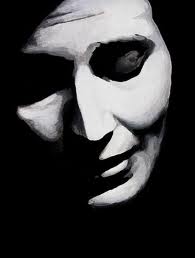 Some children might be good at math,
And think it not so telling,
When they make a mistake,
Like a minor misspelling.

But I thought it rather sad,
And by no means funny,
When on my neighbor’s door hung her daughter’s sign,
Saying, “Welcome Ester Bunny.”

Spelling’s not always an easy task,
So by no means should we berate her,
I think the problem begins,
When we congratulate her.

If you celebrate her mistakes,
Your efforts will be foiled,
When you find yourself a victim of,
A child that is spoiled.

And if you are too careful ‘bout,
What will or won’t upset her,
Soon a grown woman will be,
Wishing all a Happy Ester. 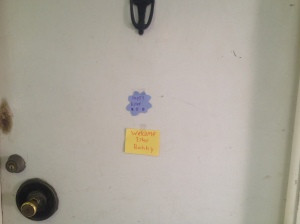 I thought of the things that I might say,

I looked at the calendar and it said,

I’m due for a blog vacation.

I may just sit on the couch all day,

And pretend that I’m a queen,

Who has nothing better to do with her time,

Than watch Oprah and read magazines.

I may take the kids out to the park,

But whatever’s in my future,

I can guarantee that it won’t be,

Spent at some dumb computer.

No matter what you say,

Nohow, no who, nowhere no way,

He walks in through the doorway
And the first thing he says is,
“You’ve done a great job on the house but honey…
Where’s the kids?” 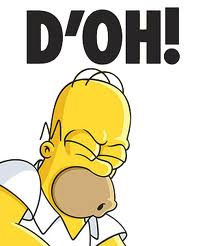 Oh, the play date! It’s always so nice when a mother arrives at my doorstep to drop off her adorable, sweet, freshly scrubbed, shiny, little child. At any given time after that, it is likely, said child will mutate into Linda Blair in The Exorcist complete with demonic possession, projectile vomiting, and joint defying head spins as my husband and I stay cowering in our bedroom, hoping that the children are having fun, and trying to have as little as possible to do with it, if they are not.

Hello! Can Anjelica come out to play?

I was thinking of creating an award for Worst Play Date Ever. One dilemma was whether to grant this award to the child for making the play date so especially horrific, or to the parent who had to endure it. Anyway, without further ado, I’d like to introduce the nominees:

Anthony: I am, what my husband calls, directionally challenged. The words Alternate Route hold no appeal for me. In fact, I’d rather go 10 miles out of my way then risk getting lost. It is especially nerve wracking when a passenger suggests a different path when I am en route. And it is even more nerve wracking when that someone is an 8 year old boy who has spent the better part of the afternoon explaining to me how my suggestions for fun and entertainment were neither fun nor entertaining.

After explaining to this boy that I would not be taking his route and why, he than suggested I drop him off at random corners, presumably in an attempt to have me arrested for child neglect. Oh, Reader, was I tempted!!

I finally blew up at Anthony right before depositing him at his door step. It’s alway nice when you send them home with tears in their eyes.

Hannah: I’m really great with a wrench. I mean, after getting through the hard part, which is actually getting the wrench to fit around the nut, it’s all righty tighty, lefty loosey from there. Of course there comes the part during turning when you realize that the left has become right and the right has become left and the damn thing doesn’t appear to be getting any tighter at all…but I digress!

So there I am, on the sidewalk, mini-skirt strategically arranged, sweating through my mascara, wrench in hand trying to tighten the training wheels on our Play Date’s bike. Her Royal Highness herself walks up, her 7 year old form towering above mine and says, “Uh…can I ride my bike already?”

Abbey: But it’s probably Abbey who absolutely takes the prize. This is a girl who decided her afternoon’s entertainment would be to extract my daughter’s loose tooth from her mouth in every nauseatingly disgusting, unsanitary manner possible. I finally asked the girls if they’d like to take a break from the afternoon’s festivities to go out for frozen yogurt, (you know, one of those places where you pay for yogurt BY THE OUNCE??).

I’m sure you know where this is going. Within seconds Abbey’s cup overfloweth with frozen yogurt and, much to my horror, she continued the atrocity by adding Sno-Caps by the shovelful. She then proceeded to sit down with her mountain of gluttony, take two bites, and ask “Can we go to Carl’s Jr. now?”

For my daughter it is long and low and can be almost fruitile,
From my son a toot from his boot can often become brutal,
When my husband’s at it, there’s such an awful smell,
You would think that Satan himself blessed him with the bowels or hell.
And when I give them all some beans, it almost sounds symphonic
All good and well although the smell’s catastrophically atomic.

Glorious Results Of A Misspent Youth
Create a free website or blog at WordPress.com.