A man might fear knives, a fight, a fire,
All that might hurt or kill him,
But never is a man so cowardly as he,
Who runs from his wife and children. 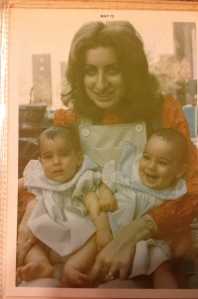 My grandfather died today. No really, you don’t need to be sympathetic. He was nearly 94 years old and his quality of life was not what it should have been and honestly, it was one of those things where we were just waiting for him to die.

The last time I saw him was about a year ago. He had no idea who I was and he kept staring at the meal schedule and asking me if it was time for dinner. I would scream in his ear “Dinner is at 4:30 and it’s about 2:30 now so, another two hours.” He would accept my answer and after a few seconds, the process would repeat itself.
The truth was, although it would have been kind of me to continue seeing him right up until The End, it was difficult for my children (he scared the bejeezus out of my daughter) who I had to take along, and he really didn’t know who I was, and, within about 2 minutes or so, he had no memory of ever seeing me. Not to mention the obscene amount of gas it took to get there and back. But I suppose, this is all beginning to sound like a lame excuse.
I imagine the women who worked in the nursing home seeing less and less people coming to visit the patients there, myself included, and thinking that it was sad…
I’m sure many people know how it is caring for old people. It is burdensome and expensive. My mother is not young herself, and her husband, quite a bit older than her, is also in failing health, I give her lot of credit for staying there and hanging on until the end.
I’m not going to lie. At the end, there was a lot of morbid jokes being made.
My mother sent me the news in a text today when I was at work. She tried to keep it light hearted, something like, “your grandfather passed so see ya!” How did I feel? Well a bit relieved, yes, but also sad. My grandfather was a bit of a curmudgeon, but he was the man who supported me when my dead beat father walked out. He was a good guy in the end.
I wrote back to my mother, “I actually feel a bit bad”. And her response came “Me too”.
Those two words written on the electronic screen just looked so sad and lonely that that alone brought tears to my eyes. After all, after our parents go, what is left between us and death?

My mother told me that if we counted cars it would make the waiting more bearable. I think we well over 1,000 when the call came. He wouldn’t be able to make it again. His car broke down, or he had to work.

I really don’t remember a time when my father was ever really living at home. He was a musician with a glamorous life style we couldn’t touch. I suppose Jane held the key, Jane,  the then girlfriend, constantly flaunted in my mother’s face. Of course, he never admitted she was his girlfriend. My mother told me and my sister about their affair.

They finally divorced when I was about 10. My father made a show of wanting visitation rights. What a joke. He never even saw us yet he fought for visitation rights, something he would actually take advantage of just once. It was clear he had no idea what to say to his then pre teen daughters on that visit. And that was the last I ever saw of him.

When I was 15, and hating my mother for no apparent reason, as 15 year old daughters are wont to do, I called him, after not speaking to him for years,  and asked him for money so I could go to a concert. He acted as if he was too concerned for my well being to let me go to a concert. Of course this was just an excuse to get out of having fork over any money (he had long since stopped paying child support).

It was then I realized what a frustrating and worthless human being he really was, how I was so much better off without him. I guess at that point I had what so many of us call ‘closure’. Although my mother, didn’t. She would, many years later, try and sue him for back child support, but it was already too late. Personally, I think she’s better off without him too.

I know there are many people who grow up without a father. I know this story may not be new or interesting to many people. For me, this is how the story of me and my father ends, but it is where so many new stories begin.