I know this is a bit alarming, but it seems my daughter has informed me that I now have grandchildren, seven of them in fact. They’re lovely girls don’t you think?

Well actually, the truth is, I’m a little concerned about some of them. I think their color is a bit off. And frankly, they look like they could use a good meal.

And one of them even turned up at a sleep over party with no panties. (Actually, I’m not just being perverted, at $25 bucks a pop, you’d think they could at least come equipped with underwear.)

Barbie says she doesn’t like them at all, but I think maybe she is just jealous. The other day, I walked in to my daughter’s bedroom and saw… 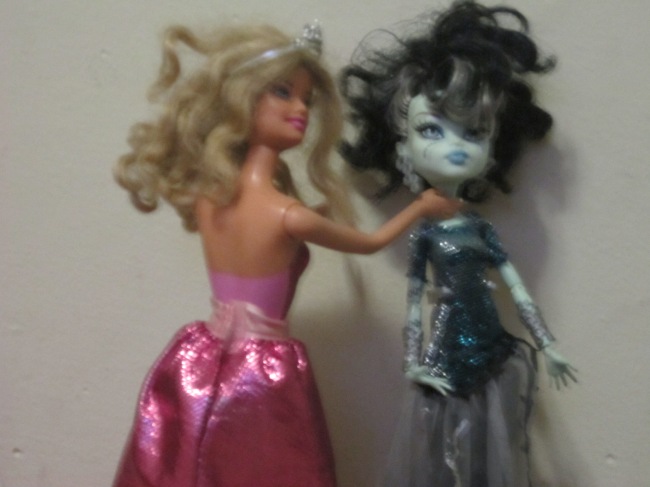 Barbie said she was just being affectionate but I think she was trying to strangle poor Frankie Stein! (Maybe she doesn’t like Jewish people.)

Anyway, my grandchildren also have these adorable pets.

I know they look a little worse for the wear but I have to say these little buggers have really won my hearts. Of course Watzit is a bit of a problem on account that he constantly is rooting around in the garbage so we have to give him a cootie bath every night.

This is Count Fabulous. I know you won’t believe this, but Count Fabulous is actually a boy. Draculaura just can’t resist dressing him in ribbons and bows. Of course, this makes my husband a bit uncomfortable, especially when Count Fabulous declares that everything is fabulous, in a very flamboyant manner, but I say, whatever makes him happy.

Besides, I know it’s really not a grandmother’s place to butt in.

But I have to tell you…

I’m a bit worried about the grandchildren.

6 thoughts on “I’m A Bit Worried About the Grandchildren”